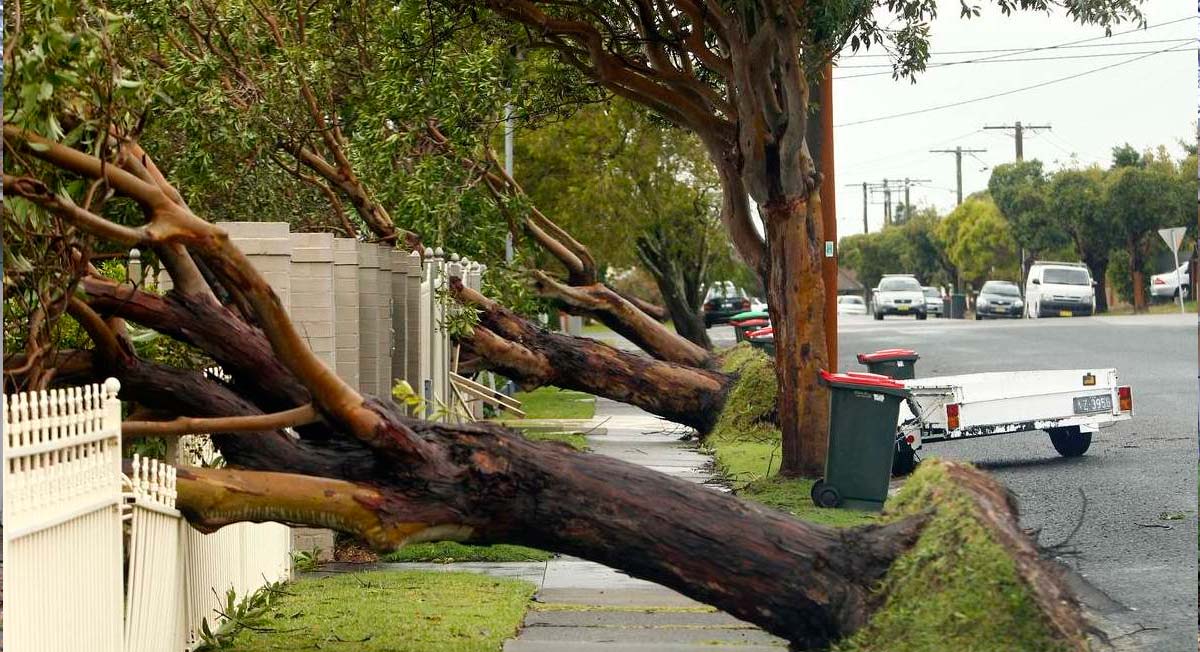 Weve been wanting to write a post about premises liability related to trees for quite some time, and were re-inspired from a recent inquiry on Reddit asking about the same.  This part of the series encompasses tree liability for insurance claim purposes under a wind-storm peril in Indiana.  Well discuss other states in a different series (although the rule wouldnt change based on the example below) and touch on tree related liability claims and litigation in a non-storm perils as well in Part II of this two part series.

A large limb (apparently half of a 50-year old Maple) was torn from the trunk during a large storm and was lodged in the power lines running across the (presumably abutting) neighbors yard.  Apparently, the limb remained suspended (in the power lines) and hovered over the neighbors shed, fence, and lawn all without making contact.  Three days later, the utility company sent someone to take it down.  The Reddit user continues on that one of the neighbors trees lost a large branch which crushed the front corner of her own fence, bordering his own yard.  During the tree removal, its alleged that part of the neighbors fence, shed, and lawn were damaged.  Also, the tree was outwardly healthy with full leaves, good bark, and nothing to indicate a problem.  After the limb tore aware, it revealed the inner 1/3 of the tree was rotted.  The interested party is hopefully having the tree taken down this week, and has photos to back up this example.

Generally speaking, its been our experience that tree damages during publicized (weather and/or media alert) storms are subject to significantly less scrutiny than non (or less direct) weather related perils.  Something known as summer limb drop would change the scenario completely, but thats a story for another part of this series and has to do with incidents that occur after storms.

Insurers will inherently enjoy the benefit of foregoing investigation of cause and origin whenever possible, and particularly when it isnt necessary, as the case is with nearly all storms causing wide-spread damage.  Conversely, almost all property owners have full coverage for their property, so whether your tree caused damage is somewhat irrelevant unless the tree was in exceptionally poor condition and there was no leading peril, such as a windstorm.  In this case, your neighbors insurance is likely to cover the damages to their property because a covered peril (windstorm) under their own policy was the trigger of the damage.  Consider a massive hurricane or tornado where trees and cars are ending up a good hundred yards (or more) from where they originated.  Who would stop the bulldozers from cleaning up in time to figure out which tree belonged to whom?

One thing to consider, as the Reddit user updated, is that his deductible is $5,000.00, so he wont be turning the claim in anyway.  Well, what If the neighbors deductible is just as high and he feels the same way?  Or, what if adjuster wants to speculate the tree was in poor condition to the extent that you knew or should have known about its poor condition?  Thats his prerogative, but his insurer likely isnt going to bite down unless the condition was plain, open, and obvious and again without a reasonable peril or storm.

If your neighbors insurer were to suggest you should have known about the tree, then the insurer would separate the damages caused by your tree to his property.  If they paid the claim and also feel you knew or should have known, they may make a claim against you.  The problem in the latter scenario is that your insurance company would simply say it was an Act of God (or as stated in the policy), which creates a conflict between two insurers.  I am one-hundred percent certain that unless the neighbors damaged property is valued in excess of x amount (a relatively decent sum of at least a few thousand) and there was a storm that made the news, it isnt going to happen.  The last thing an insurer wants to do is waste time and (what would be) years of litigation over a few thousand dollars.

If both parties have a high deductible, it might be best to be good neighbors and figure out a reasonable solution to the problem.  Perhaps repairing / replacement of the damaged items and splitting the cost is a better route.

This brings us to a good segue to discuss the yard. There is hardly an insurance policy out there that covers a yard, or lawn, or grass.  Simply put, the risk is too high and this would create a circular problem in the world of insurance.  There would be claims for dogs peeing on grass and people would inherently plant a new lawn then make a claim every year.  Wed all be paying (if we all did have the luxury) exorbitant amount for landscaping.  If the yard was pristine with thousands of dollars worth of roses and golden grass, the neighbor could take you to court for this but once again only if the tree was in such poor condition that you knew or should have known of its inherent risk.  Again, your insurer would step in as they would owe a duty to defend the claim, and any damages resulting from the tree but only if it was in poor condition.  Your neighbor would have to prove this by hiring at least three experts one for weather, one consulting arborist, and a consulting landscape architect to value the lawn.  For the life of me, I cant imagine anyones lawn is worth that much (with closely abutting neighbors) but you never know.

In court, youre only entitled to the market value of something at the time of the incident.  There are no punitive damages in property cases unless, for example, your trees have caused injury on countless occasions and probably killed someone.  Really, these extra damages are meant to deter a defendant from poor behavior, and they arent commonly seen in property damage claims or cases.  Your neighbor is only entitled to the actual cash value of the damaged property, except if his insurer is paying the bill under a full replacement cost policy.

Summer limb drop is a phenomenon where, according to many experts, a hot and dry period is followed by a heavy downpour, and followed again by very hot, dry, weather.  In this case, its been proven that trees will absorb water and rapidly distribute it to the limbs.  Sometimes, this happens in a dead-limb area that may seem alive under certain viewpoints.  The limb, often weak and now heavy, will suddenly drop in the mid-day without even a gust of wind.

Since this usually occurs unexpectedly (as opposed to a storm), often times innocent people and property can end up hurt or damaged.  Since this is the type of loss that occurs outside of a wind or hail peril (otherwise not at the time of storm) it is often investigated to determine the extent of the negligence, which plays into the landowners premises liability.  This will be discussed in Part II of this series.